I was a terrible male nail biter for 20 years. I know I damaged my nail bed. The good news is I finally stopped. I've tried numerous products to stop my nails from splitting and peeling and nothing seemed to work. Finally I found Barielle 7 in 1 nail treatment and that stopped the problem until I cut my nails, then it starts again. I was cutting my nails short, like 1/32 of an inch. If I let the nails grow out to 1/4 of an inch or so the splitting and peeling grows out and the problem stops.

Maybe it's just a matter of time, or maybe there is nothing else I can try or do. Any advice woud be appreciated. I've included a couple of pictures showing the length I need to keep my nails at and a picture of the splitting/peeling growing out. 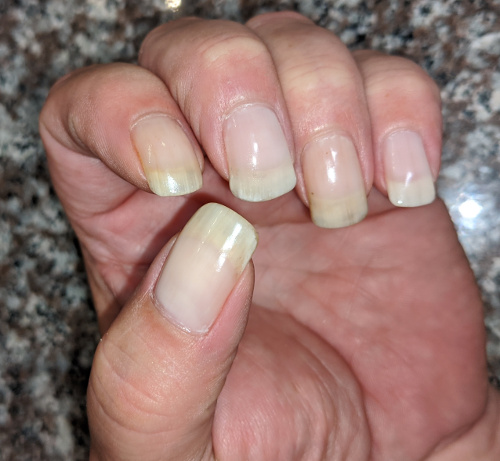 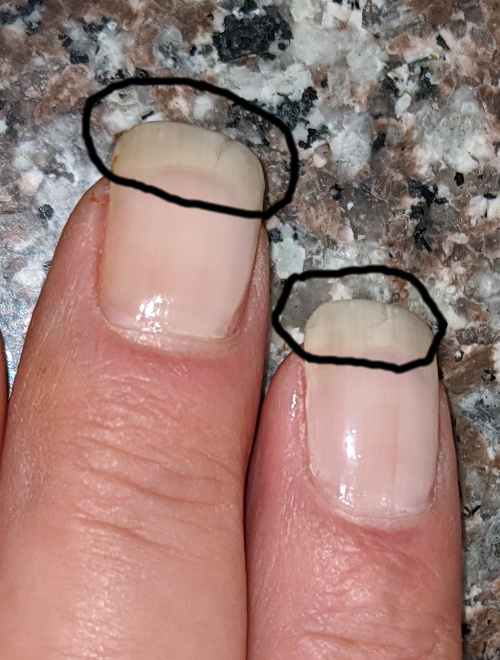 They are super dry which is why they are splitting and peeling. I've never used the product you mentioned but most hardeners will ultimately dry the nail. You need a good quality cuticle oil which also needs applying under the free edge of the nail. I recommend Solar Oil, it needs to be purchased from a reputable nail salon not from ebay as its often fake from there.
Last edited: Mar 18, 2020
5

Thanks Trinity, that makes a lot of sense and it's kind of what I thought. That why I tried the Barielle 7 in 1 nail treatment since it says, "Barielle 7-in-1 Elixir Nail Treatment is excellent for moisturizing, nourishing and restoring the nail bed." but obviously they aren't getting quite enough moisture. I'll try that solar oil next.

The reason I posted in here is because I have a couple nail salons by my house that I was planning on going to for advice, but they are temporarily closed for now due to that virus going around. Sad, but true, nobody know how long it will take to get that virus under control. For now I'll just keep using the Barielle treatment, it is stopping the peeling for now, even though I have to hold a pencil different due to the nails.

I know what you're saying about ebay, I've ran into fake stuff from there myself and haven't used it again since then.

To add to that, if they split don’t keep growing them, accept your limits and file them down and enjoy them healthier at a shorter length. You file them regularly so that if a split appears it can be filed away without much length missing.

I do find this sort of thing is usually down to the damage from biting rather than a deficiency as it’s trauma.

All that said, right now in the present situation Id be getting those nails down as short as they go to keep them clean and keeping your diet as varied as you can provide for yourself right now as if not trauma it’s can be a showing of what’s going on inside the body. Dark chocolate has iron
5

Thanks House Beauty. I appreciate the advise. Nail biting is a stupid and disgusting habit and i can't believe I did it as long as I did it. I did a lot of damage to my nail bed

I appreciate your comment about diet. I know how important that is.

I did find solar cuticle oil online and ordered it and I'm going to try that next.

Thanks again, I appreciate your advice.
5

Something I thought was important to mention about the cuticle oil, is it absorbs quite quickly into my nails. I first applied it to the underside of the free edge. After I did the first hand, I thought it had evaporated, but them I saw the skin was still wet. I thought wow it really absorbs quickly.

Thanks again to the pros here for the advice!
5

Had to make adjustments with covid and hand sanitizer. I tried latex gloves but my hands would sweat a bit, so I stopped trying to use them. I make numerous stops (10-12) every day and use hand sanitizer after each stop. The alcohol in the sanitizer is really hard on the skin and nails, so I cover the top on the nail with a nude nail polish and use the solar oil 3 times a day (morning, afternoon & evening) on the underside free edge of the nail and sides of the nails. All is good for now.

You have very nice skin and nails generally. The ring finger has a line that runs into the matrix. Also, not as pronounced, but the middle finger has a longitudinal line as well. This is a chronic problem since it comes from the source of the nail plate.

This usually occurs with older people when the cells making the nail stop working in different areas. So, we see what we call ‘ridges’ which are really ‘valleys’ where the nail is now thinner. It makes the free edge more likely to split at the weak point.

Is the product shown on your nails the one you’ve been using? It may be helpful to have that one nail reinforced with a thin enhancement. Or a drop of nail glue to hold it together.
Last edited: Jan 11, 2021
5

Thanks for the information on the ridges jlsdds, I've also noticed those on my nails. I've seen ridge fillers, but have never tried it. Do they help? Give extra strength?

The product I'm still using on my nails is Barielle 7-in-1 Elixir Nail Treatment as shown in the photos. I said nude in my post, but it's more like a transparent white, milky color.
Last edited: Jan 11, 2021

Ridge fillers primarily have particles that ‘fill’ the valleys and give a smoother appearance to the nail. It looks to me that you have strong nails and take excellent care of them. These two renegade nails don’t have to make you crazy.

I think that bandaging, so to speak, will be the only way to keep the nail from splitting apart, tearing and hurting. A drop of nail glue would be my solution.

Oils are great for helping brittleness, but will not correct the flaw.
K

I see this post started back last March, but just had to ask about your ‘male’ bitting?!?!?

For 20 years too! Is the nail bed another fetish as well?!?

karen@latb said:
I see this post started back last March, but just had to ask about your ‘male’ bitting?!?!?

For 20 years too! Is the nail bed another fetish as well?!?

I didn't even notice the 'male biting'! Sounds interesting!