Hello. So basically my sister asked me to do this hair. I was doing it at home and so there was no access to a basin (I have just bought a portable basin over this actually)

In consultation we discussed;
- the colours I had (I didnt haven time to get more as she needed it by a certain time and it has been christmas season)
- her wanting dark roots and not quite as bright as fire angine red.
- Some light beliaging techniques
- the treatment I would be using
- How I would want her to wash her hair (this didn't work out well)
- Wanted a subtle beliage

She came in with this; 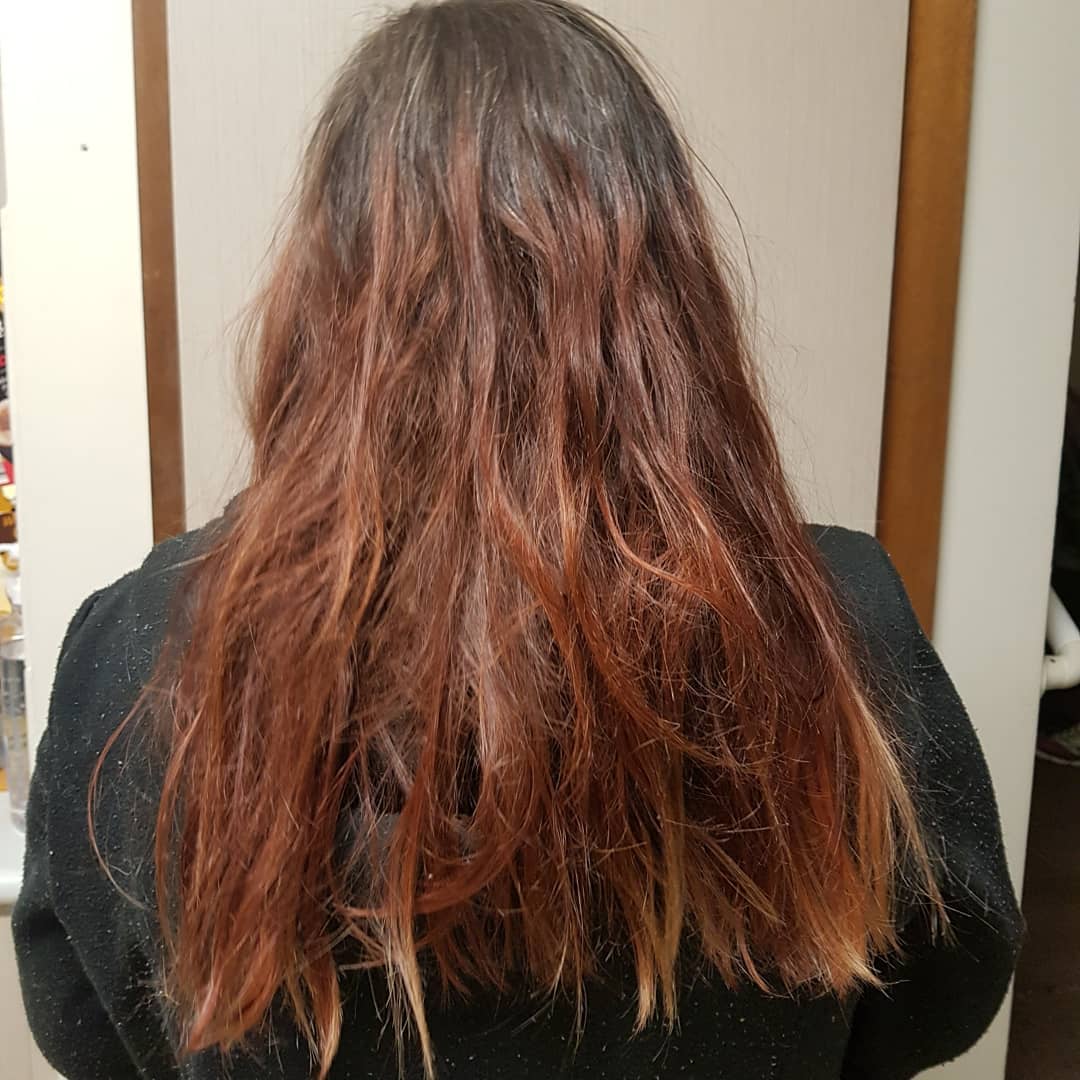 So first I did 4 foils shifted in the back, 2 on each side and 1 at the top of the head with thick weaving as a beliage technique with Bleach and 10 vol. Her ends processed to a level 9 and even some parts to a level 10.

I did her roots with 3.0 and told her to wash it out quickly and if it stained the foils then shampoo it out. She came out of the shower with her ends being blue. So I clarified it out of the ends in the kitchen sink.

After that I dried her hair off and coloured her ends with a RED pigment booster and 10 vol.

After that had processed she washed it out and I used Helis gold to treat her hair. I left that in for the duration of her cut.

Following that she complained saying all my hard work was making her hair not look right. This was the result (please note that this was incandecent lighting at 1am so the colour isn't as vibrant in the images); 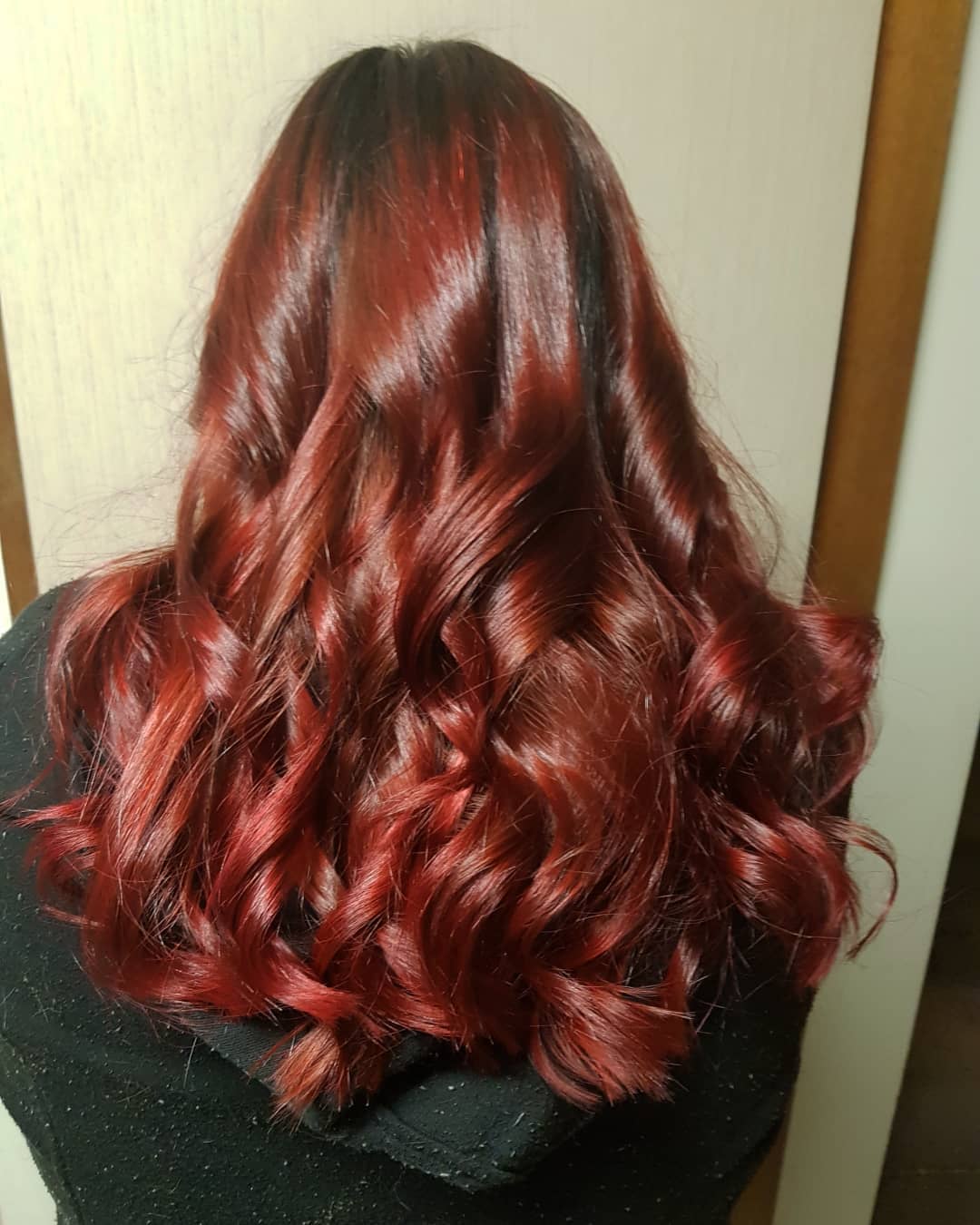 Now I'm a still training. I do seem to be interested in colour and finished this at 1am in the morning after workign all day. I love doing hair but I was very clear on where I could get her. She has since started showing me images of hair she wants that are all dark base, red hair... but different tones and different levels. Some have longer beliage. Some have shorter beliage. Some have more of a root stretch and some dont. I mean I'm starting to feel she has an unacheivable idea and I am not sure how I can communicate with her on how this is.

Here are some of the examples of hair she is now sending; 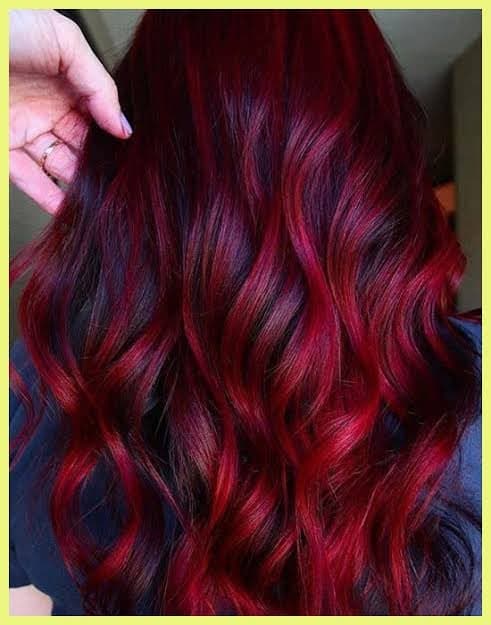 So I have told her I can do more to her hair again. She doesn't want me to refoil as she feels foiling is unnessersary and makes the process too way long. I have told her I could stretch the root out but she is not understanding how the process works. I also asked her about the colours and explained one of these images has more plum tones and she sees it as black and basically is saying that isn't right and I'm seeing the wrong thing. I know I can achive the second photo easily with the use of some foiling and more root stretch whilst also boosting the colour because I know my skill.The first image, I would be worried for her hair.

I am paying everything out of my own pocket as I am an apprentice. I don't hate being able to practice at home but I do feel that I am struggling with the communication side on her end. I feel like I am struggling to get her to understand that to achieve any of the ideas she has had I need to be given full realm of steps to take. She feels its a process that shouldn't take too long when in reality we all know that isn't the case.

How do you guys get clients to understand the process of how long a colour can take? I only took 3 hours including cut, style and treatment all up which is similar timing for what my colleagues do for this process.

Stop! Do not do her hair for free at silly o’clock anymore. That way madness lies!

Her message to you afterwards should have started with

You did a good job and her hair looks fine as it is. Tell her to leave it for a while so that it can recover from the strong chemicals. Then do not be available for a few weeks! Let her find out how much it will cost her going to a salon and paying normal prices.

Unfortunately, she sounds like one of those friends/relations that thinks nothing of taking advantage of you and her expectations are also pretty unrealistic.

All that’s happening here is you’re losing money and your confidence is getting battered.

First of all you're right, you know you're skill. I'm assuming she is not a hairdresser, so why does she think she can tell you how long the process should take and how you should do it.

.
Also top tip never pay for the products used - they should be covering the cost of the product at least! Yes you're training but you shouldn't be paying for them to have their hair done!

Even if she chose to use the dreaded box dies - it would still cost her....

The best thing you can do is always do a strand test. That allows you to see how the hair is going to react and you'll have a better understanding of what you need to do.
This will also help her see what is achievable in one sitting.

What you've done isn't bad at all. And I personally think you can achieve at least one of these goal photos.

I would also advise that you shampoo the clients hair when doing such big colour work - don't let them do it.
If you decided to do the root colour the same time as balayage in the future what I'd suggest is that you rinse the bleach off first with cool water and plaster it in conditioner- better still an anti oxy conditioner if you have it. Then proceed to rinse the darker root colour also with cool water and just keep the pressure high and keep the hair moving at all times, so the colour doesn't have time to settle anywhere.

So tackling this colour.....
As you've already got a level 3 on the root you'll need to stick with this as your base colour now - unless you want to do a colour correction

So what I'd do is aim for the picture with the darker roots and red ends. Because no red tint is going to lift through a 3 and give you the result you want.

I'd do a root smudge of 3.0 and then on the ends you need to use something like a Highlift red that will really make it pop and give you that real red tone.
What product line do you have access to?

But don't rush in to this. Take the time to discuss it with her and do it when it's convenient for you.
Don't be put out until stupid o'clock in the morning! - no salon would ever do that!

Don't bend over backwards for clients - they will make you bend, and bend until you snap!
S

I agree and I think you did a great job too

So I have access to a lot. I can get Wella, Colouru, color on, fanola, highlift, Loreal, inebyra.... and a lot more. I was initially trained mixing my own colours. We were Wella but my boss boss would only order your bases and then your pigments such as 0/11 and we would have to make our own colours so I feel confident I can definately achive the colour as I have a bit of experience in creating my own colours. I'm worried she will change her mind again however.

Reide said:
So I have access to a lot. I can get Wella, Colouru, color on, fanola, highlift, Loreal, inebyra.... and a lot more. I was initially trained mixing my own colours. We were Wella but my boss boss would only order your bases and then your pigments such as 0/11 and we would have to make our own colours so I feel confident I can definately achive the colour as I have a bit of experience in creating my own colours. I'm worried she will change her mind again however.
Click to expand...

Okay cool. The fact that you used to mix colours from scratch really interest me. Especially with wella as there isn't a mix tone for every tone available across the rang.
If I was you I'd make sure she definitely knows what she wants before attempting anything else. If she keeps changing her mind..... You'll have more and more colour to remove / uncover and you'll have hair that is sensitised and porous.
F

I always recommend those starting out to make a 'friends and family' pricelist. Say u've worked out the cost of travel, products, etc and this is to cover those costs and to allow you to buy more, nessessesary, equipment. Don't put silly prices on it, but obv you want it to be cheap enough that they allow you to 'practice' too. Maybe throw in the odd blow dry here and there, to keep them in favour, but nothing where you are using products.

Tell them your tutors have advised you to do this. You can then adjust prices as you pass different stages.
You'll find some family members will prefer this, as it takes the awkwardness out if the situation....some friends aren't sure how much to give you, without offending....and you probably say 'oh it's fine', because you don't want to say an amount either. This way both sides are clear and if they aren't happy with the prices, they will find someone else, without causing issue.
Remember to spell out on your prices....'complete colour change' prices start from 'xxxxx' and 'time for service' will be discussed individually. I always give a 'worst case' and tell them this, then tell them if their hair responds favourably, then time and cost may be less.
I would also have shampood myself, rather thsn sending ur sis in shower. U have more control over what's happening this way.
You did a good job on her.....don't be disheartened.

Yes, I agree about working out your actual costs to ensure you’re not paying for the privilege of doing their hair (!!) but I’m inclined to disagree about providing discounted rates to a number of people at the start unless you can be very strict about it.

Reading threads on here, the number of posters who are stuck providing free or ultra cheap services to friends and family, years after qualifying is quite shocking.

Also they are often expected to turn up with their scissors when visiting people on their down time and how many are manoeuvred into providing free wedding/occasion hair as their ‘wedding present’ ? That’s particularly stressful just on it’s own.

Unfortunately, many of us know a few individuals who won’t think twice about taking advantage, so I’d advise being really strict and only allow 1 or 2 people a discount, at the most. Usually a parent, grandparent/aunt/best friend.
You must log in or register to reply here.
Share:
Facebook Twitter Reddit Pinterest Tumblr WhatsApp Email Link