︎• Please don't be negative towards this post. I only want people to see the truth and the real damaged caused to natural nails by MMA. MMA is still being used in cheap nail salons, passed off as an acrylic (Acrylic does not cure under a UV lamp) MMA is also being used in online cheap imitation nail products from imitation polygels, glues, base coat & gel polishes to imitation SNS powders & liquids... some of these online products don't even have a list of ingredients attached...
The pictures attached is the damaged result of my nails after using mainly an imitation polygel brought on wish. I used the brand's basecoat and "polygel" along with their gel polishes for approximately 9months.
Also in those 9months I would sometimes get my nails done quickly at one of the dodgy shopping centre nail bars. (Being a single mum its almost impossible to find 2hrs of uninterrupted time to do your own nails

) so I would get them to do a refill only with no polish etc (i would finish my nails)
It was approximately 11 months ago that I started to notice the extent of the damage caused to my nails along with the difficulty in removing even just the Polish at times, if removing everything from my nail it would take me sometimes up to 2 hours of hand filing, that would be after soaking my hands in acetone for over an hour! and it barely dissolves any of it off, it just turns into a sticky messy gritty glue like surface that doesn't wipe clean with anything ive used.... it has to be filed off, you end up filing away your own natural nail just to try remove it all. It was approximately 4months in when i first noticed damage around my cuticles and nail line, becoming red raw often end up bleeding at some points and sometimes I had pain for hours even days after where the tips had been glued/applied and the ends of my fingers sometimes tingled or went numb. I had irritations on my arms and sometimes my legs from when I had been filing off whatever it was applied to my nails My arms would become extremely itchy with red rash like for days after it reminded me of fibreglass rash...
To this day the ends of most of my fingers have become desensitised permanently as a result. My nails are unbareable without any enhancements applied. Its too painful they split downwards and continuously split or break and Bleed often just knocking the end of my finger is enough to cause bleeding or even a hot running tap, the pain can be pretty bad. The worst part is I'm a nail tech (haven't worked since having kids) and i know better but still went... which is why I'm posting this cause im sure there are many other ladies suffering or been thru this... unfortunately my nails are so badly damaged now I don't even know where to start to try to repair them or even just to be able to grow the nail back without breaking I've tried to leave my nails bare the longest I was able to do that for was 6 days my nails hurt too much and even become numb at the ends at times.
15 months ago in my nails were long strong and all I used to do was just a gel overlay or just polish! now look at them..... I've learnt a lot about MMA the only thing I don't understand is how these places and product's still are available and how many people have never heard of MMA and all the possible damage it could cause if applied.
I tell my story and tell people to tell my story again and again in hope that women can be more educated on what they're putting on their nails or body.
Thank you for reading please pass on to anyone who is unaware or is in the same position as me. xxx 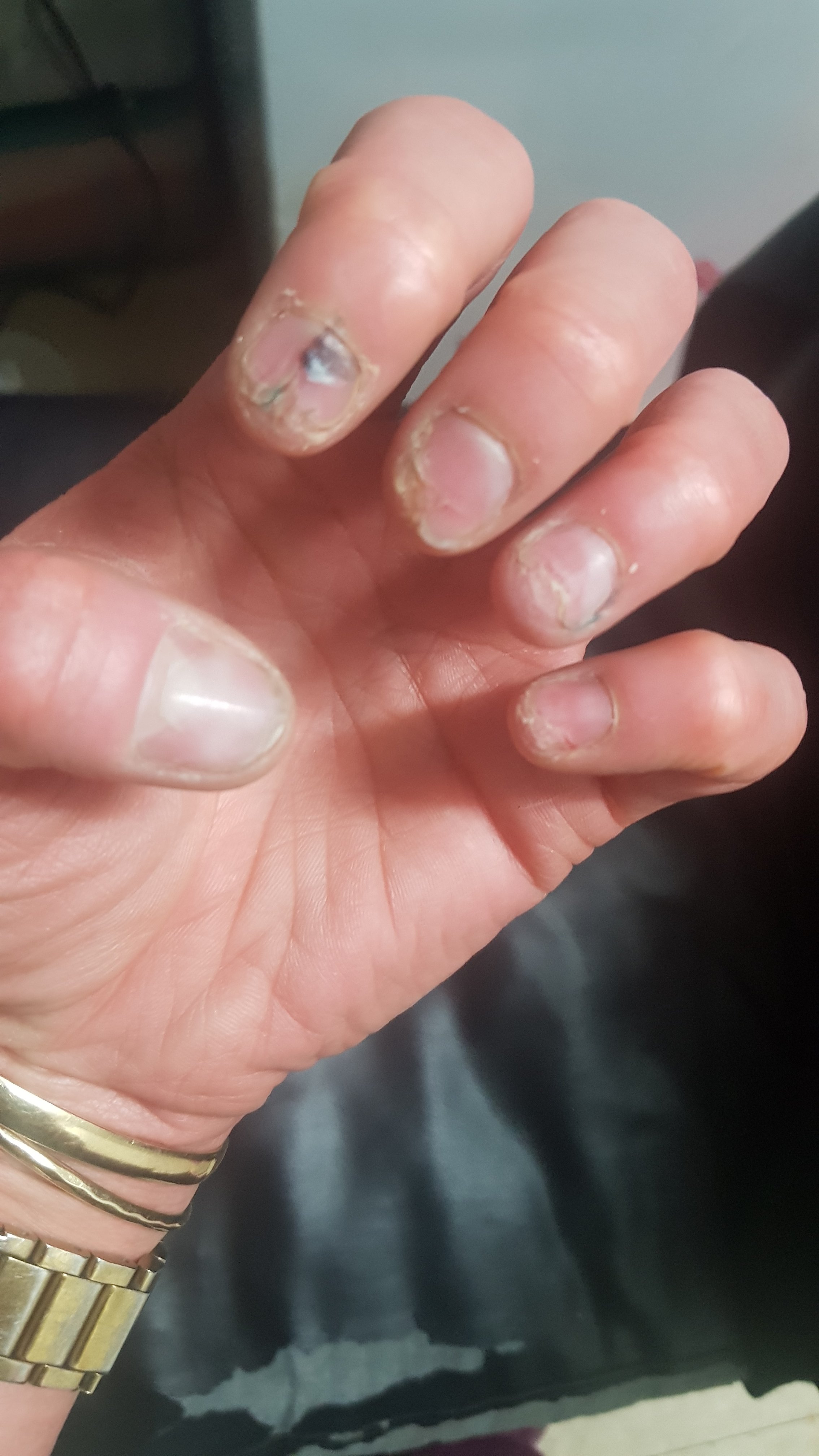 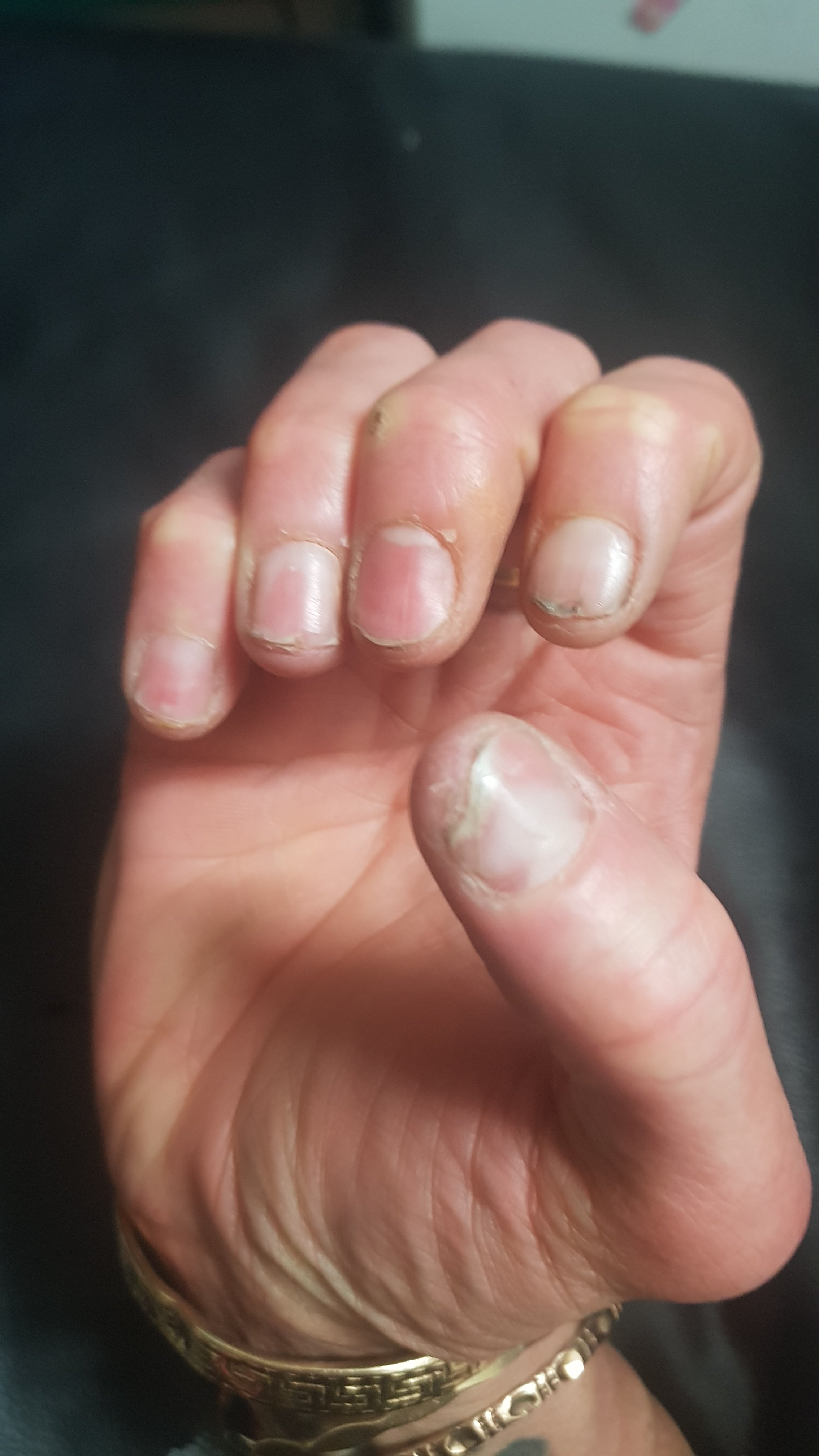 You're preaching to the choir, I'd be surprised if anyone on here isn't aware of the dangers of MMA or any product used incorrectly, it's why we constantly tell newbies and DIYers not to use products they are not trained to use.

I've been in the industry for 18 years and campaigns/petitions/etc. to ban MMA have been circulating here in the UK since before then. I believe its banned in the USA, I'm sure one of our USA geeks will confirm.

Our Governments clearly won't take up the challenge so we have to educate our clients about the dangers.
Last edited: Sep 11, 2020
A

Trinity said:
I've been in the industry for 18 years and campaigns/petitions/etc. to ban MMA have been circulating here in the UK since before then. I believe its banned in the USA, I'm sure one of our USA geeks will confirm.

Our Governments clearly won't take up the challenge so we have to educate our clients about the dangers.
Click to expand...

It's not expressly illegal everywhere in the U.S. but the FDA (Food and Drug Administration) classified it as poisonous in the 1970s. Since then, they have been taking action against manufacturers of MMA monomer in the form of seizure, fines, and court proceedings.

Legally, possession and use are explicitly banned in at least 32 states.

No regulation specifically prohibits the use of methyl methacrylate monomer in cosmetic products.

Note: 100% MMA. Only monomer - not when used as an ingredient in polymers or gels.
A

No regulation specifically prohibits the use of methyl methacrylate monomer in cosmetic products.

Note: 100% MMA. Only monomer - not when used as an ingredient in polymers or gels.
Click to expand...

That was the FDA's page I was referencing above.

Note that although no official federal regulation prohibits it, the many state regulations do. As I mentioned, 32 states (as of 2012, IDK about anything more recent) prohibit MMA liquid monomer use in salons. 250 million people out of the country's 330 million live in those 32 states. So 75% of Americans live in a place where it is prohibited.

Unfortunately, a lack of federal regulations means that there's a patchwork of state laws. The ability of these states to enforce these regulations is questionable due to a lack of financial resources allocated to state cosmetology boards. For instance, my home state, Maryland, passed regulations in 2017 requiring cosmo licensees to earn continuing education credits before they renew their license biennially. Since its passage, no money has been allocated to enforce this despite the fact that a fiscal analysis estimated that enforcement would cost less than $150k per year. Maryland has the highest income per capita of all 50 states and a moderate to high tax rate but couldn't come up with a modest sum for enforcement. With COVID-19 currently causing state budget shortfalls, there will likely be even less regulatory enforcement. Unlike the federal government, states cannot run deficits so they must make cuts to services or borrow from banks and risk their bond rating.
J

I’m so sorry this has happened to you. I think you have been overexposed and have developed a sensitivity and/or allergic reaction to acrylic products. When you said you itched where any dust come in contact with your skin, well, that is the big tip-off.

I am a veteran of 42 years in the business and obviously, I can’t say for sure, but don’t surprised if you cannot successfully wear acrylic nails again. I am personally allergic to many hard gel products due to overexposure when these first came out about 20 or so years ago. It was a 4 year recovery.

It is so sad that this has happened to you, sending a hug and don't worry because you are believed, I have seen countless nails that have been damaged by mma and bonds of trust between the nail industry and the public shattered.

Finding a great nail oil can help, one that does not cause you any sensitivity, and not blaming yourself. Keep a 180 grit file to use on the free edge only when it grows / appears, even if there are splits, gently file from the outside in toward the centre of each side and this will help seal the edges.

I would recommend also using a nice natural water based polish on the nails if you would like, and if you cannot stand colour on your nails because they are shorter now you could try keeping it simple with a clear.

Nails are left thin, weak, bendy, and split easily from the free edge - the nail bed / fingertips are highly sensitised as the millions of tiny nerve endings in them are more exposed to knocks and bashes, mma requires a massive filing down of the natural nail in order to bond, the product is originally used for bonding broken bones back together.